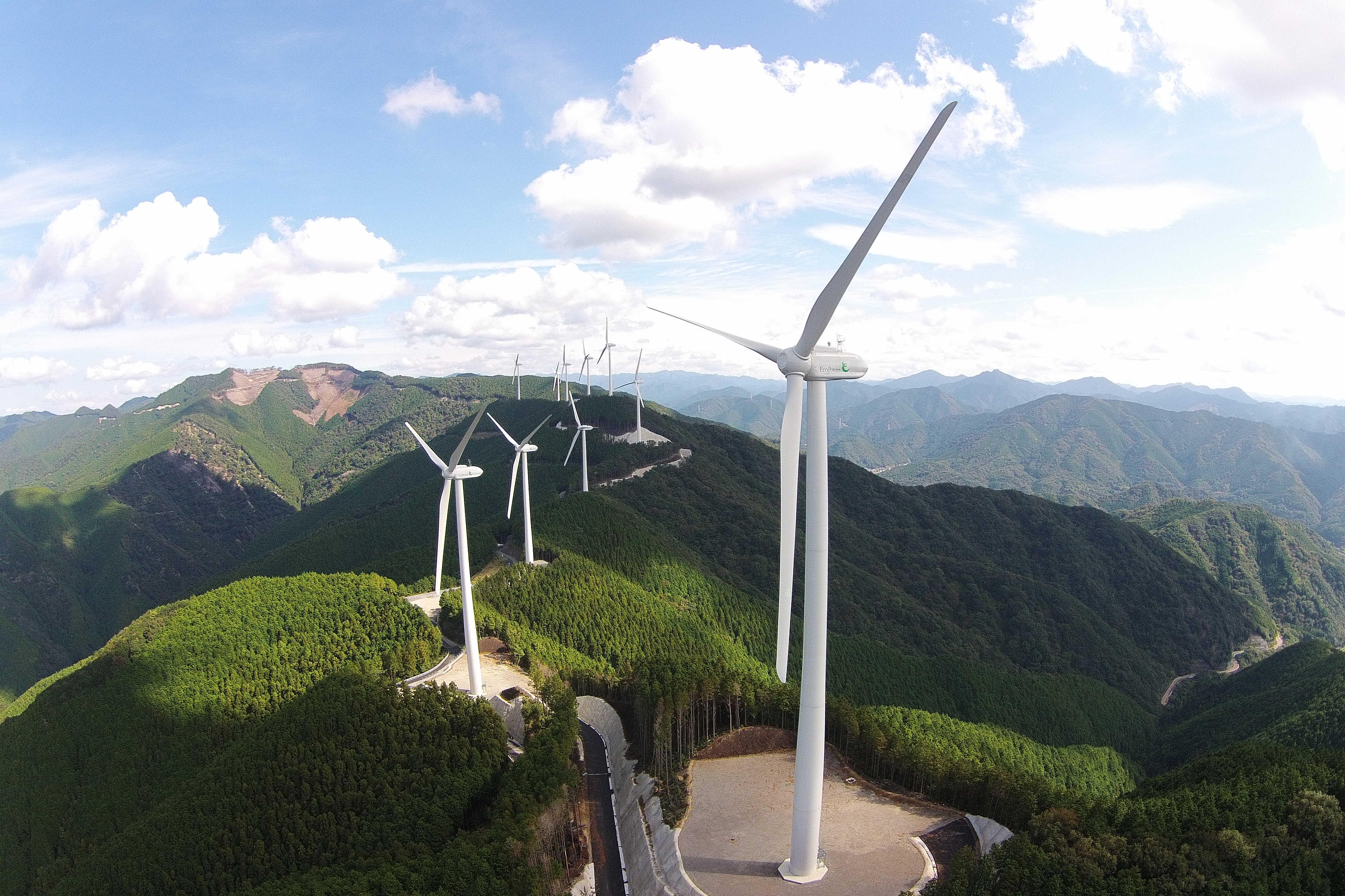 Constructed 10 windmill units (2,000 kW/unit) along the ridge of the Shirama Mountains

Japan’s feed-in tariff (FIT) system introduced in July 2012 has accelerated the spread of renewable energy. We undertook the construction of the Hirokawa-Hidakagawa Wind Farm which was the first FIT project of our affiliate EcoPower Co., Ltd. The project is for construction of 10 windmills (Output: 2,000kW/unit, Nacelle Height: 80 meters, Blade Length: 40 meters), on the ridge of the Shirama Mountains in the center of Wakayama Prefecture. We commenced the civil work in December 2012, completed assembly of the windmill by August 2014, and started commercial operation in November 2014 after commissioning.

Site preparation including cut-and-fill of 270,000 m3 of soil

Civil work required half the construction period. We cut and moved more than 270,000 m3 of soil to create the windmill sites and the service roads. The cut-and-fill work faced unexpected difficulties because the bedrock formations were harder than expected, but we avoided schedule delay by optimizing dump operation. Another issue was that the forest roads to transport the cut earth were narrow and shared with general vehicles. From both safety and schedule standpoints, it was important to prevent accidents among our dump trucks and with other vehicles. We took a number of measures including construction of turnouts, installation of additional convex mirrors, and sharing of information by radio communication to achieve zero accidents in the construction project of approximately one year and a half.


As one part of the electric work, we laid transmission lines stretching a total of 10 kilometers, from the KEPCO connection point to the substation to the windmills. This required work on prefectural roads busier than the roads at the windmills site and in front of rows of private houses. Before we began the work, we held a meeting to explain the situation to residents, and we gave updates by area on what was happening. Thus we advanced the project with the understanding of neighboring residents.

We unloaded the huge windmill materials at the port and then transported them in special land vehicles 20 kilometers. At some points, we expanded roads and installed traffic signals to secure the path for materials such as 40-meter windmill blades. It took about four months to transport the turbines through urban areas at night using special vehicles such as the Schnabel car. During the day, in parallel, we used erection devices to transload the materials in a dedicated yard so that they would fit through the narrow mountain forest roads, and we transported the turbine materials item by item from the forest roads to turbine sites.

More than 200,000 hours without a single accident！

An important goal in this project was to finish construction with zero accidents and to adhere to the contracted schedule. From the beginning of construction in 2012, we made it through more than 200,000 hours with no accidents, and we managed to shorten the construction period to start selling power one month sooner than scheduled.