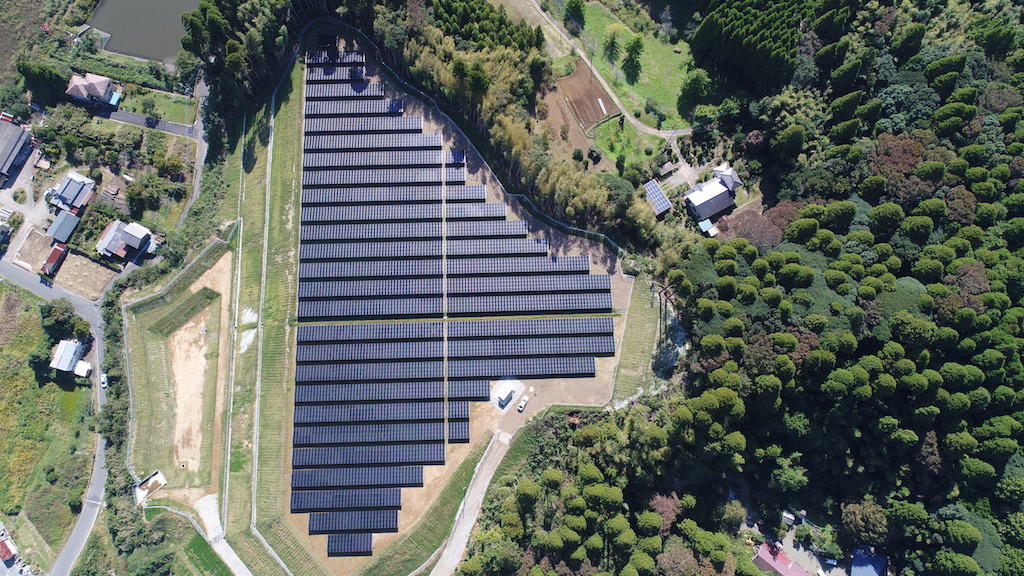 Renewable energy is increasing due to the introduction of the feed-in-tariff (FIT) system. A solar power plant--utilizing one form of renewable energy--was constructed on a 3.9 ha in Sanmu, Chiba Prefecture. Land development work for the project covered 72,000 m3.

Mountain forest trees 800 meters from Hyuga Station, which is a 40-minute train ride from JR Chiba Station on the Sobu Line, were logged to develop the land and install 6,272 solar panels. The generated power is transmitted by 6.6 kV high-voltage interconnect.

Residences and schools are situated around the site, and thus overtime work and work on holidays were completely restricted due to noise and for children's safety. Under the circumstances, trial operation was completed in August 2018, after which power transmission began.

Sanmu cedar trees as tall as 25 to 30 meters were cut down and cut into a certain length on site before being carried out.

The cedar was processed into chips for fuel and sawdust for bedding of livestock animals at a processing plant.

Although the land development work of the poorly-drained clay layer after the tree logging became more difficult due to unseasonal torrential rains and bomb cyclones, temporary reservoir construction and ground improvement work helped facilitate its completion.

To make up for the delay with the land development work, piling, mount assembly, and solar panel installation work was conducted beginning in the northern area.

The work in the southern area was also conducted speedily in accordance with the progress of the land development work.

【The Scenes from the solar panel installation】

The pre-use tests at full and partial loads were completed, and power transmission to the interconnect began on August 23.

【Scenes from the electrical work, adjustments, and pre-use tests】